In five distant Papua New Guinea towns, 1705 farmers have received assistance to revitalize their cocoa fields. The Food and Agriculture Administration (FOA) assists farmers in East Sepik and Sandaun Provinces with funding from the European Union.

Courses like how to restore productivity by rehabilitating and revitalizing old, infected cocoa blocks are conducted with the farmers. According to the FAO, individuals taking part include a number of women and youths.

The training included learning how to produce Cocoa Pod Borer tolerant seedlings so that they can apply these skills in their blocks. They were also shown various forms of pruning to prevent trees from disease and pest infestation and to boost cocoa yield.

According to Michael Lames, FAO’s national cocoa production officer, the decline was caused by the invasion of the Cocoa Pod Borer in the 1980s, but this training intends to restore output and income.

With these newly acquired skills, participants will be able to replace aged cocoa trees and improve their post-harvest production techniques.

Be the first to hear about the latest product launches, collaborations and online exclusives. Join the WR Carpenter (PNG) emailing list today. 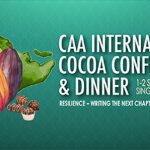